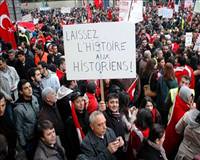 France moved on Thursday to make it illegal to deny the 1915 mass killing of Armenians by Ottoman Turks amounted to ‘so-called genocide’, prompting Ankara to cancel all economic, political and military meetings.

Lawmakers in France's National Assembly - the lower house of parliament - voted overwhelmingly in favour of a draft law outlawing the denial of Armenian claims, which will be debated next year in the Senate.
Turkish Prime Minister Tayyip Erdoğan described the bill put forward by members of French President Nicolas Sarkozy's ruling party as "politics based on racism, discrimination and xenophobia."
He said Sarkozy, was sacrificing good ties "for the sake of political calculations," suggesting the president was trying to win the votes of ethnic Armenians in France in an election next year.
Erdoğan said Turkey was cancelling all economic, political and military meetings with its NATO partner and said it would cancel permission for French military planes to land, and warships to dock, in Turkey.
French Foreign Affairs Minister Alain Juppe, speaking to journalists after the vote, had urged Turkey not to overreact to the assembly decision and called for "good sense and moderation."
Juppe said Turkey had also recalled its ambassador from France, a decision he regretted.
"What I hope now is that our Turkish friends do not overreact about the French national Assembly decision. We have lots of things to work on together," Juppe said.
Earlier, about 3,000 French nationals of Turkish origin demonstrated peacefully outside the parliament ahead of the vote, which came 32 years to the day since a Turkish diplomat was assassinated by Armenian militants in central Paris.
France passed a law recognising the killing of Armenians as "so-called genocide" in 2001. The French lower house first passed a bill criminalising the denial of the Armenian claims in 2006, but it was rejected by the Senate in May this year.
The latest draft law was made more general to outlaw the denial of Armenian claims, partly in the hope of appeasing Turkey.
It could still face a long passage into law, though its backers want to see it completed before parliament is suspended at the end of February ahead of elections in the second quarter.
National Assembly speaker Bernard Accoyer said on Wednesday that he doubted the bill would pass by the end of the current parliament, as the government had not made the bill priority legislation.