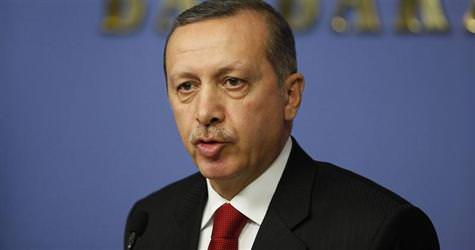 Prime Minister Tayyip Erdoğan on Thursday accused France of racism and xenophobia for passing a bill making it a crime to deny Armenian allegations of a 1915 mass killing by Ottoman Turks.

Erdoğan called off all economic, political and military meetings with Paris and cancelled permission for French military planes to land and warships to dock in Turkey, marking a new low in relations between the NATO partners. "This is politics based on racism, discrimination and xenophobia. This is using Turkophobia and Islamophobia to gain votes, and it raises concerns regarding these issues not only in France but all Europe," he told a news conference, adding Turkey could "not remain silent in the face of this".
The bill was proposed by 40 deputies from Sarkozy's party and passed in France's lower house of parliament. Erdoğan accused French President Nicolas Sarkozy of sacrificing Turkish-French ties to win the votes of ethnic Armenians in France in next year's election, and said the bill limited freedom of speech in France.
"I am asking now if there is freedom of expression and freedom of thought in France, and I will reply myself, no, there is not," he said. "Turkish-French ties are not just 50-100 years old. It is a centuries-old strong relationship, a process that Mr.Sarkozy sacrifices for the sake of political calculations. This bill will do more injustice to French people than it does to Turks," Erdoğan said. "This bill has removed the free discussion atmosphere (in France). The principles of liberty, fraternity and equality, which form the basis of the French revolution, have been trampled on." He said the bill was voted on by only 10 percent of the French lawmakers who attended the vote at the parliament. "This step will open heavy wounds that will be difficult to heal in Turkish-French ties," he said. "This is the first step, the first stage of measures, and they will be implemented decisively."
The eight item initial sanctions plan released by Erdoğan is as follows:
1. We are recalling Turkey's Paris Ambassador to Ankara for advising.
2. We are cancelling all economic, political and military meetings with Paris as well as all mutual programs such as seminars, courses and personnel exchanges.
3. Turkey will no longer collaborate with France on any pairing projects within the EU framework.
4. All political consulting with France will be halted.
5. All joint military activities and exercises will be cancelled.
6. All annual permission granted for military flights and landing and take-offs will be cancelled. Permission will be required for every flight.
7. Turkey will be refusing all applications made for military warships to dock in Turkey's ports.
8. Turkey will no longer be participating in the Joint Trade Committee meeting scheduled for January.