Second wave in the knockout move 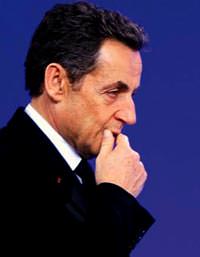 Turkey has established a series of sanctions to be implemented in stages against France dependent on developments unraveling. If France continues to pursue passing the contentious bill than the Airbus tender may be put on hold. Sarkozy may also be subjected to air field limitations.

Details of the sanctions Turkey is considering implementing on France, whose parliament passed a bill making denying the 'so-called genocide' allegations put forth by Armenia a crime, are slowly beginning to surface.
Turkey has categorized the sanctions planned into stages dependent on the developments that ensue. Targeted is first and foremost the Senate followed by French president Nicolas Sarkozy. Should the bill pass the senate vote, then the decision on the Airbus purchase, a deal worth billions of dollars, may be put on hold.
Prime Minister Tayyip Erdoğan and Foreign Affairs Minister Ahmet Davutoğlu clarified the details on sanctions to be issue in stages on France during a meeting held the day before yesterday. Accordingly, Turkey's primary target will be the 34-member senate which will be back on duty in January. Should the bill be passed by the Senate, Turkey will put the second plan into effect. Turkish Airlines is also expected to put the planned Airbus purchase on hold.

Ankara will continue to further these initiatives to ensure Sarkozy does not approve the bill by the May elections. Should Sarkozy approve the bill however, the following measures will be put into effect:

Economic collaboration will be put on hold.

Political relations will be brought down to the lowest level.

An ambargo on military flights and port docking, will not include passenger flights. However, French state officials may be subjected to an ambargo on certain civilian flights.

All collaborations with France in international platforms will be suspended.

Turkey, which has referred to the ruling as going against fredom of thought and speech, will be pursuing legal measures. In addition, Turkey will offer support to revisiting the debate of what transpired in Algeria and Ruanda in order to ensure France loses charisma in the international arena as well as immigrant votes.

The sanctions announced by Prime Minister Erdoğan as being the first stage, will also encompass Sarkozy. Once the annual block permission for military flights is eradicated, should Sarkozy want to use Turkey's air field to reach a country further east, Ankara will ensure the transit is not done comfortably. With his refusal to even accept a phone call from Gül, Sarkozy will not be granted permission to pass until the very last moment. The final decision as to whether Sarkozy will be allowed to pass through Turkey's air field will be decided on by Erdoğan and Gül. Should Sarkozy, who refused to answer Gül's call, try to make a call himself, then all lines in Ankara will ring busy.