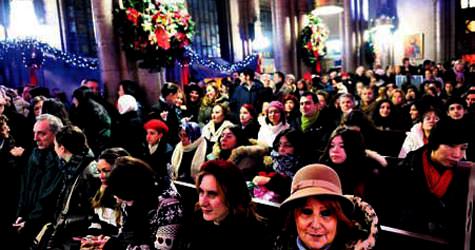 Christmas joy was also experienced in a variety of locations in Turkey. One of those very special spots was Istanbul’s Church of St. Antoine located in Beyoğlu.

Citizens began flocking to the church in the early afternoon yesterday. While security refrained from allowing those chewing gum or wearing hats into the church, those that did enter went straight for the candles which cost 1 lira. Long lines were formed by those who wanted to make wishes by lighting their candles and placing them in special vessels filled with sand and water. A significant number of police were also assigned to secure the church vicinity. Many of the church visitors took photographs with the decorated Christmas tree in front of the church.

HALF ARE MUSLIMS
The evening mass commenced at 21:00 and was attended by Beyoğlu Mayor Ahmed Misbah Demircan and singer, director and actor Mahsun Kırmızıgül. While most present participated in singing the carols, one Turkish catholic, who chose to remain anonymous, underlined that, "'tolerance that is the spirit of Christmas" by stating; "This is not merely a holiday celebrated by minorities, it is also a day highly respected by Muslims. If you look around at those who have come to the church, you see nearly half are Muslims."
SOUNDS OF 'AMIN'…
Çiçek Boyacı, one of the Muslim participant's in the evening's celebration, described her emotions by stating, "I am Muslim, but this is the home of God. What difference does it make, isn't praying what matters?" When the Catholic Priests said, "This is a night that should be shared by everyone; we are celebrating the birth of Christ. Let this be the gospel for all of us," the church echoed with voices saying "Amin" and "Amen" alike.
Meanwhile, Patriarch Bartholomeos also held a Christmas mass at the Fener Rum Orthodox Patriarchate in Istanbul.