The crowds spilled out from the courtyard 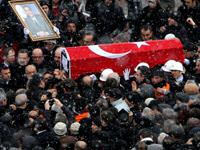 The funeral ceremony held at Fatih mosque was attended by President Abdullah Gül, Speaker of the Assembly Cemil Çiçek and Prime Minister Recep Tayyip Erdoğan as well as a variety of ministers, deputies, businessmen and a significant number of citizens.
Following the funeral ceremony held at Fatih Mosque, Aydın Menderes's coffin was transported to the Topkapı Mausoleum cemetery along the street named in honor of his father, Adnan Menderes Boulevard. At the Topkapı cemetery, Menderes was laid to rest with a series of prayers as his beloved mourned in tears.

Aydın Menderes passed away on Friday in Ankara at the hospital he was receiving treatment.
On Sunday, Aydın Menderes' coffin was first transported to the Fatih Mosque in Istanbul and later to the Topkapı Mausoleum to be buried with his family. Speaker of the Parliament Cemil Çiçek and Menderes' wife were on site when Menderes' coffin arrived to the mosque. Police then carried Menderes' coffin on their shoulders to be place in the mosque courtyard.
'I lost my life partner' Ümran Menderes expressed that she has lost her life partner and she was suffering greatly, "I was with him 24 hours a day. He was a very unique person. My loss is great." In regards to her husband's illness, Ümran Menderes stated, "He was feeling discomfort in his chest and an internal medicine specialist arrived to treat him. Unfortunately, the situation was misconstrued. He had no fever but I think that the clot had already developed in his lung. They thought it was pneumonia, however that was an incorrect diagnosis."
"Turkey's painful loss" President Abdullah Gül: I felt deep sorrow. Our nation has lost a very valuable politician. With his name, his political line, his democratic stance and his experience, he had gained the Turkish public's regard and has now left an inerasable mark on our political life.
Foreign Affairs Minister Ahmet Davutoğlu: As a member of a family which contributed heroically to Turkey's democracy, throughout his life he always pursued an honorable political struggle.