Tanker traffic halted in Istanbul due to heavy fog 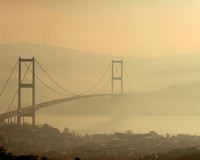 The Istanbul channel was closed in both directions at 7:21 a.m. (0521 GMT), GAC said in an e-mailed statement. It was not clear when the strait will re-open, but a GAC official told Reuters that they expected the fog to clear in the afternoon.

Six tankers were scheduled to transit the Bosphorus on Wednesday, the agent said, and only one of them passed early on Wednesday before the traffic was closed.

Weather conditions were clear at the Dardenelles Strait at the other end of the Sea of Marmara and the channel remained open, it said.

The Bosphorus and Dardenelles are the only maritime outlet for Black Sea countries shipping oil, grains and other commodities to world markets.

Traffic disruptions are common in winter in the straits as poor weather makes it difficult for tanker captains to traverse the narrow, environmentally sensitive waterways. The delays can raise Black Sea crude grades and world tanker rates.