F-16’s claimed to have hit civilians 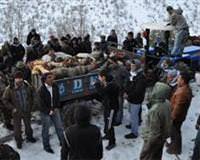 Thirty people were killed in an apparent air strike by Turkish warplanes in southeast Turkey near the Iraqi border overnight.

"We have 30 corpses, all of them are burned." Fehmi Yaman, the mayor of Uludere in Şırnak province. According to Yaman, the people hit were a group of village smugglers who were smuggling illegal fuel on mules.
According to allegations, security forces were tracking a group thought to be terrorists who entered from the Northern Iraq border. They first opened fire and then bombed the region with F-16's.


The Turkish military said it launched air strikes against suspected terrorists in northern Iraq near the Turkish border on Wednesday night and was investigating the incident after local officials said 35 villagers were killed. The general staff said on its website that drones had identified a group of PKK terrorists on Wednesday evening after a tip-off they planned to attack Turkish security bases in southeastern Turkey. Warplanes targeted them with strikes in an area with no civilian population, it added.