A surprise from Haniyeh at the AK Party group meeting 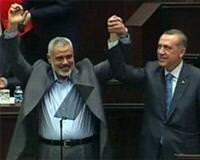 During Prime Minister Erdoğan's address, Palestine's Gaza administration Prime Minister Ismail Haniyeh entered the conference hall and joined the AK Party Group.
Haniyeh joined Erdoğan on the lectern and the two leaders embraced. Erdoğan halted his address upon Haniyeh's entrance. Following their embrace, and the ensuing load applause from the AK Party group, Haniyeh stepped down from the stage and Erdoğan went on to relay information on the meeting he would be holding today with the Palestinian Prime Minister.