Arınç: Not intentional, negligence will be probed 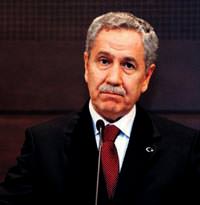 Deputy Prime Minister Bülent Arınç has announced that shedding light on the Uludere incident is a responsibility of conscience for the government.

Announcing that the Uludere incident was handled at a six and a half hour Council of Ministers meeting yesterday, Arınç states, "We know that our Chief of General Staff has personally presented details on the group's actions to our Prime Minister." Arınç stated that the group was initially warned with flares and then later with artillery shots. Despite the warnings however the group continued to move, which is why the bombing was initiated Arınç explains and emphasizes, "There was definitely no intention." Noting that terrorist attacks and groups are intensified in this area, Arınç states, "Activity was detected along the border and intelligence was received that this was a group of terrorists attempting to infiltrate, possibly carrying weapons loaded onto mules and were a 50-person group. This information was corroborated from a variety of channels." Emphasizing that the incident was in no way intentional, Arınç stated that an investigation continues into whether there was any negligence or fault. Responding to a question, Arınç stated, "The possibility this was a set-up is also an option we are looking into."
REPARATIONS TO BE PAID TO VICTIMS' FAMILIES SOON
Arınç responded to another question by announcing that reparations will be paid to the families of the victims within the next few days. When asked whether an apology would be issued however, Arınç responded by stating, "We may offer our condolences, however it would be a negative expectation for an officially apologize."