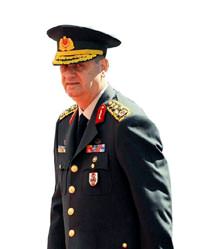 The court committee overseeing the 'Internet Memorandum' case which is part of the grander 'Action Plan to Fight Reactionaryism', which is being tried at the Special Authority Istanbul 13th High Criminal Court had ruled to send a written notice to the prosecutor to proceed as necessary in regards to Başbuğ. After which an investigation was initiated on Başbuğ, whose name has surfaced in both suspect's defenses as well as on documents. Başbuğ will now be called into questioning in the investigation initiated by Special Authority Public Prosecutor Cihan Kansız who is conducting the Ergenekon investigation.
BAŞBUĞ WAS INFORMED
Defendants in the 'Internet Memorandum' case, former Deputy Chief of General Staff Hasan Iğsız, Lieutenant General Mehmet Eröz and Captain Murat Uslukılıç, had testified that the websites in question were operated under Başbuğ's knowledge.
Lieutenant General Mehmet Eröz had stated that the order for the internet memorandum has come down from the Chief of General Staff at the time. Defendant Captain Yüzbaşı Murat Uslukılıç had explained that the memorandum was prepared under Colonel Dursun Çiçek's order. Uslukılıç stated that the memorandum had been presented to the Deputy Chief of General Staff at the time Hasan Iğsız, whom he also stated had written a note to the commander.
General Ilker Başbuğ, who retired in 2010, is the highest-ranking officer involved in the investigation carried out by state prosecutors as a result of democratic reforms aimed at strengthening civilian rule. Başbuğ is set to testify on Thursday in connection to the 'Internet Memorandum' case.