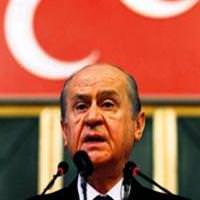 Turkey’s Nationalist Movement Party or MHP leader Devlet Bahçeli criticized the AK Party’s aim to grant Kurdish rights and expressed his desire for a buffer zone to be established in Northern Iraq in order to prevent terrorist attacks and incidents such as the recent deaths of 35 civilians in Uludere.

During his party's group meeting, Bahçeli delivered the following messages:

(The Uludere incident) The fact that the PKK turned the funeral ceremonies into a show, laying their rags on the coffins, has only worked to shed partial light on the fogginess behind the incident. Meanwhile, their bloody hands attack the district governor, in an event which is perceived as innocence by community psychology. When it comes to Uludere our public just watches those who are of the mentality to expect an apology in awe. Our findings are as follows: Barzani and Talabani are behind and shield the PKK. There is no longer anyone left who is unaware that there are global projects behind the attacks staged in Turkey from Iraq.

(On establishing a buffer zone) Even if there was just a one percent chance that those illegally crossing the border have intentions to kill even a single soldier, or citizen, then whatever means are necessary must be taken immediately and in this incident that is what happened. The need to establish a security buffer zone in northern Iraq has once again resurfaced as a result of what recently transpired. A buffer zone would not only decrease the number of terrorist attacks, but would also prevent further instances of these types of events from occurring.