A message to the USA: Diplomacy must be at work on the Iran issue 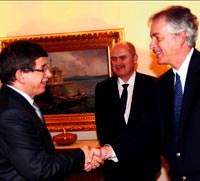 At a time when the bells of war appear to be ringing between Iran and the United States, U.S. Deputy Secretary of State Burns while paying a visit to Turkey was relayed the message, “There is enough tension in the region, we do not want any more.”

While a showdown between Iran and the USA over the Strait of Hormuz abounds, Ankara warned Washington, "There is enough tension in the region, we do not want anymore." Foreign Affairs Ministry Undersecretary Feridun Sinirlioğlu hosted his United States counterpart William Joseph Burns yesterday. During the meeting, Sinirlioğlu emphasized his concern for Iran's nuclear activities, the escalating tension over the Strait of Hormuz and the potentiality of sectarian strife. While Burns stated, "We cannot allow for the Strait of Hormuz to be closed," he also expressed that should Iran close the strait, they will not refrain from exerting military intervention.
During the meeting, the political deadlock in Iraq was also laid to the table. While Ankara states, "the dialogue process needs to be revived," the message was also delivered that operations against the PKK will continue.
Both nations renewed their commitment to collaboration against the PKK, primarily through the intelligence base established at İncirlik. While Sinirlioğlu emphasized the discomfort felt due to the effects of the rising ethnic tension in Iran on the PKK, he also pointed out the increasing activity along the Iraqi-Syrian border. Sinirlioğlu warned, "The increasing tension in the region, will also work to destroy the relative stability established by the USA over the past eight years. The Sunni-Shiite conflict is getting completely out of hand."
During the meeting the issue of the Assad regime's resistance was also discussed. While Burns relayed the Russian decision to support the agreement reached with the Arab League, Sinirlioğlu shared his concern the Damascus administration may stall the Arab League. During the meeting between the two foreign affairs undersecretaries, the issue of the Syrian opposition organizing in Turkey was also laid to the table. In an exchange of views on the Cyprus issue, Kıbrıs Sinirlioğlu noted that there has been no progress in ongoing deliberations on the island and that the Greek side insists on resisting seeing the Turkish side as their 'equal partners'.
Delivering the message, "We expect you to exert pressure on reaching a compromise prior to the Greek's EU Term Presidency," Sinirlioğlu also warned, "This will put Turkish-EU relations on a dead-end street with no way of turning back." Burns and Sinirlioğlu will be meeting again today. Yesterday evening, Burns met with Foreign Affairs Minister Ahmet Davutoğlu.