BDP's Zana "We will not turn away from weapons or violence" 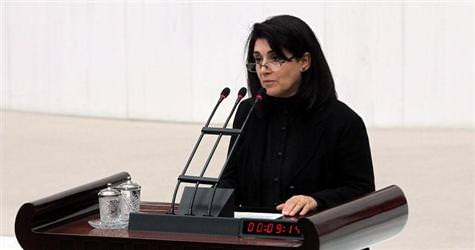 While the environment of freedom established through Turkey’s democracy continues to widen each day, BDP’s Leyla Zana, known for her affiliation with the PKK terrorist organization, has made a number of statements that push the limit.

Leyla Zana offered a praise of violence that would be unacceptable for any democratic nation.
Hailing armed terrorist attacks, Zana states; "we made it to this point with armed activities, weapons could be quieted if an agreement was reached, however they should not be relinquished, because weapons are our insurance".
BDP MP Leyla Zana stated that she is partial to the silencing of weapons, however without the granting of status and a legal assurance, weapons, which she refers to as "Kurd's Insurance", should not be surrendered.
BDP Diyarbakır MP Leyla Zana states that as long as the Kurdish issue continues, weapons are the Kurd's insurance.
Zana evaluated the news of a 'single-sided cease-fire' which has surfaced n a number of newspapers according to an internet website affiliated with the PKK terrorist organization.
"I don't think that anything one-sided will be meaningful," states Zana, who goes on to emphasize that democratic agencies need to radically become more widespread and adds:
"We have now reached a certain point through an armed struggle. I am absolutely not debating whether weapons need to be relinquished. They are the Kurd's insurance. As long as there remains an issue, those weapons are insurance for the Kurds. Zana went on to state the following: "Because we are people who have seen what happened in the past. We have lived through the 80's. There is a mutual distrust. There are certain steps that need to be taken for this distrust to dissipate. I am of the opinion that the biggest step needs to be taken by the government.
Because it is the Kurds that have been subject to injustice and it is the state that has subjected them to it. Without the granting of Kurdish status and securing a legal assurance, we need to not discuss the Kurds dropping their arms.
However, I am partial to silencing weapons, because the youth should no longer face bloodshed.
When the dialogue process begins, and we look back at yesterday then we will be greatly saddened and hurt for our youth.
"WE NEED TO GO TO A REFERENDUM"
"Kurds, like every public, need to go to a referendum," states Zana. "Do they want a federation, self-rule, a state system or a confederate structure? Or independence? The Kurdish public must put forth their own volition… If the Kurdish public wants to live, then there are formulas in which to do so. All sides should show respect to what the Kurdish public wants."
Zana suggests house arrest for terrorist leader Abdullah Öcalan
Stating that Abdullah Öcalan's isolation must be lifted and that more so than him being transferred to any prison, he should be under home arrest, Zana also commented on the recent wave of KCK arrests by stating, "When we look at the underlying issue, we see it is the Kurdish problem. They are simply causing us trouble through these daily arrests in order to not debate the Kurdish issue."