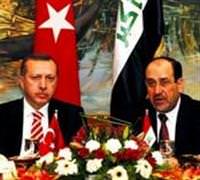 Speaking with Maliki for forty five minutes over the phone the day prior, Erdoğan delivered the message; “You are headed for chaos. The tension in the atmosphere must be released,” and reminded, “The responsibility is on your shoulders.”

Prime Minister Tayyip Erdoğan and Iraq Prime Minister Nouri al Maliki spoke over the phone for 45 minutes the night prior in which they discussed the sectarian tension which has arisen in Iraq. Drawing attention to the developments regarding Iraq's Sunni Vice President Tariq Hashimi and the Sunni ministers in the cabinet, Erdoğan stated, "Sectarian and ethnic polarization is being witnessed in the nation following the withdrawal of U.S. troops. Iraq is headed for irrevocable chaos." Reminding of Iraq's cosmopolitan structure, Erdoğan stated, "Each development in Iraq would deeply affect the region." Erdoğan also mentioned the terrorist attacks in Iraq and expressed his condemnation. "The only thing we do not want to see in Iraq is a brotherhood fight; the tension in the atmosphere must be released. The responsibility is on your shoulders," and delivered the message, "We are ready to contribute however we can to the normalization of the nation."


During the conversation, Erdoğan also discussed the trial process regarding Hashimi, and went on to state, "We cannot accept the concept that Hashimi is in any way related to the terrorist attacks in the nation. Cases involving political figures should not be politicized. The trial process needs to be handled objectively in a manner that is distanced from pressure. Within this framework, it may be beneficial to the process to hold the trial in Kirkuk rather than in Baghdad."

Erdoğan also expressed that problems experienced between joint governments, such as exerting pressure on certain cabinet members could negatively affect democracy. Erdoğan went on to define Turkey's Iraq policy to Maliki by stating, "Iraq's sovereignty and territorial integrity is very important for us. At the same time, our greatest wish is for the Iraqi public to live in peace, democracy and prosperity."

"WE DO NOT DISCRIMINATE"

After relaying his wishes for Erdoğan's safe recovery following the surgery he underwent in month's past, Iraqi Prime Minister Nuri Maliki, went on to state that nobody is discriminated against for their religious beliefs in his country. Relaying that Iraq has faced difficult times due to terrorist attacks, Maliki spoke out against the criticism of an authoritarian regime by stating, "We will advance democracy in Iraq." According to the information obtained, Maliki expressed that the trial process regarding Hashimi will be held in Baghdad.