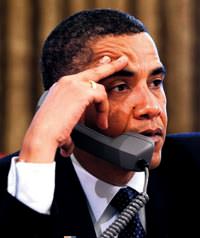 In addition to discussing developments in Iraq and Syria, the two leaders also shared their views on Iran's nuclear program. U.S. President Obama called Erdoğan for a telephone conversation that lasted approximately 45 minutes. During the discussion, Erdoğan relayed to Obama his concerns that the Baghdad administration is headed in an authoritarian direction.

An announcement has since been released by the Prime Ministry regarding the telephone meeting:
"In addition to the latest developments in Iraq, the two leaders discussed the manners in which they can continue to offer their support to an inclusive and partnership-based government that will bring democracy, welfare and stability to the Iraqi public. During the discussion, Turkey and the United States remained in concordance on supporting the Syrian public's legitimate demands for democracy and continuing to condemn the Damascus administration's merciless actions."

The announcement also stated that Erdoğan and Obama also discussed Iran's nuclear program during the telephone conversation, in which it was expressed that Iran needs to continue to engage in dialogue with the international community on this issue.

The written announcement also stated, "Mr. Prime Minister and U.S. President Obama have also reached a consensus on maintaining consistent communication in order to be in productive collaboration in order to contribute to the democratic process and economic development in the Middle East and North Africa."