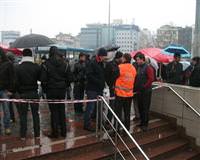 A breakdown at a power station in northwest Turkey triggered power cuts on Saturday in the country's largest city, Istanbul, and several others, but power was restored in most of the region by the afternoon.

Subway lines and trams stopped working in Istanbul, a city of 17 million, causing traffic jams on the main roads. With heating systems shut down, residents were left in freezing temperatures.

Power was cut at around 1330 p.m. and was gradually being restored about two hours later, with electricity returning to 80 percent of the affected region, state power transmission company TEIAS said in a statement.

It said electricity had been cut in six provinces due to a fault at the Bursa gas-fired power station caused by bad weather. There was heavy snowfall in the Istanbul region on Saturday.

Work on restoring the remainder of the network would be completed soon, the statement added.

Also affected were the provinces of Sakarya, Kocaeli, Tekirdag, Kirklareli and Edirne.