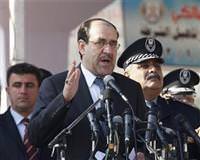 Iraq’s ambassador Kamil Abi-Tabık has been summoned to the Turkish Ministry of Foreign Affairs in response to a series of statements made by Iraq’s Prime Minister inferring that Turkey was interfering in Iraq’s internal affairs.

According to the information obtained from diplomatic sources, Iraq's Ambassador to Ankara was called in to the Ministry by Foreign Affairs Ministry Undersecretary Feridun Sinirlioğlu, who informed the envoy that Turkey would not accept the criticism that Turkey was meddling in Iraq's affairs.

Noting that it is extremely natural for Turkey to be concerned regarding their neighbor's stability, Sinirlioğlu told the envoy that it is vital Iraq show respect for the constitutional order and that democracy function, and although this is coming from Turkey is is not interfering in Iraq's internal affairs.

Sinirlioğlu also emphasized the importance placed on relations between the two nations.

Meanwhile, Turkey's Ambassador to Baghdad Yunus Demirer was also called in to the Foreign Affairs Ministry for comments made from Turkey considered to be meddling in its affairs.

According to an article released on Iraq's Ministry of Foreign Affairs website, Ambassador Yunus Demirer met with Deputy Minister Muhammed Jawad al-Dooreki who relayed the information that Iraq's Foreign Ministry refused to accept certain statements made by Turkish officials of late which they consider to be interfering in Iraq's internal affairs and that they are concerned this will negatively affect relations.

According to the information obtained, the Iraqi' Deputy Minister requested that Demirer relay these concerns to the Turkish government and that comments that could damage mutual relations be avoided.

"The Turkish ambassador gave assurances that Turkish officials' statements were in good faith and he will inform his government in Ankara of the Iraqi position," a foreign ministry statement said.
During the meeting, both al-Dooreki and Demirer emphasized the importance of maintaining good relations between both Turkey and Iraq's administrations.