Iran meetings to be held in Istanbul 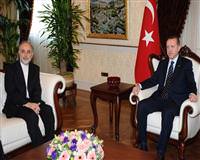 Iran’s Foreign Affairs Minister Salehi, who met with both President Gül and Prime Minister Erdoğan during his stay, has announced Turkey as the address for Iran’s nuclear negotiations.

Ali Akbar Salehi Minister of Foreign Affairs of Iran's Islamic Republic held a series of meetings during his stay in Turkey. Starting with paying a visit to the Mevlana Museum in Konya yesterday morning, Salehi later met with Prime Minister Tayyip Erdoğan in Ankara and was also hosted by President Abdullah Gül.
Responding to questions from the press at Esenboğa Airport, Salehi expressed his desire to hold the five plus one group negotiations on Iran's nuclear program in Istanbul and Turkey.


Salehi expressed that he is continuing his rounds and even though it has not been confirmed as of yet, there is a great possibility that the meetings will be held in Istanbul with the date to be determined soon. Prime Minister Erdoğan and Salehi met for one hour and 45 minutes yesterday during which they reached a consensus to act together regarding decreasing the tension in Iraq.

'THE REGION COULD BE AFFECTED'

Prime Minister Erdoğan stated, "A sectarian conflict could deeply affect the entire region, and it is necessary to be extremely cautious". During the meeting, in which Syria and regional issues were also discussed, Salehi went on to relay to Erdoğan his concerns regarding the NATO missile radar which will be set up in Malatya. Upon which, Erdoğan stated, "We will never be involved in any sort of initiative that would target our neighbors."