Critical PKK summit with the U.S. held in Ankara 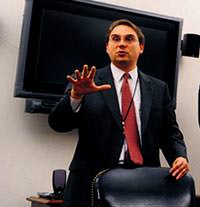 Turkey and the United States are laying out their 2012 strategy against the PKK terrorist organization on the table, beginning with a critical meeting held in Ankara on Wednesday.

U.S. Deputy Assistant Secretary of Defense for Counternarcotics and Global Threats William F. Wechsler met with officials from the Department of Police, the National Intelligence Organization (MİT) and the General Staff.

During the meeting, the strategy for the fight against terrorism was broken down into three dimensions.
Accordingly, eight camps in Northern Iraq will be eradicated. Consultations will be held with banks in Europe to ensure funds, which soar to the 500 million levels through trafficking and other means, are no longer allowed to be stashed in said banks. The third step involves expediting the extradition of certain members of the PKK terrorist organization who reside in European nations however are wanted by Turkey with red bulletins out on their names.

The United States will be contributing to anti-terrorism efforts involving European nations. During the summit, also attended by DEA, FBI and CIA agents, information sharing and joint investigations into the PKK and Al Qaeda were also proposed.