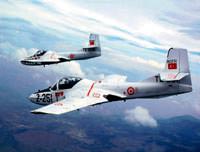 The Hürkuş, a new series of training planes developed to replace the T-37 series, which has suffered 12 accidents the latest being in Foça, will be delivered to the Turkish Air Forces in March.

Domestic manufactured jets will soon be replacing the T-37 fleet of training planes which have resulted in 12 accidents thus far, the latest being a devastating crash in Izmir's Foça.

The final stage has been reached in the development of the Hürkuş training aircraft after a five-year-long development and production program and the first trial flights have been successfully completed.
The initial delivery of Turkey's first-ever national training plane, the Hürkuş, will be delivered by Turkish Aerospace Industries Inc. (TAI) in March.

The latest accident involving the T-37 training aircraft that joined the Turkish Air Forces' fleet in the 1980's, took place just over a week ago in Izmir's Foça district. After two days of search and rescue efforts, the body of a Pakistani pilot was recovered. Search efforts for the Turkish pilot who was also onboard are still ongoing.

The Hürkuş training jet, which has both daytime and nighttime flight capability and allows for the teaching pilot and student pilot to sit back to back, will be able to provide the closest training possible for F-16 and F-35 fighter jets.

The Hürkuş was designed for difficult training conditions and has aerobatic, cabin pressure and oxygen producing capabilities. In upcoming years, the Hürkuş (Freebird) may also be developed into a combat aircraft. The domestic made training jet, designed to be used over the next 25 years, will also be entering the international training aircraft market.

NATIONAL PROJECT IN LIEU OF THE F-35 FIGHTER JET

Turkey will also soon be purchasing domestic planes in place of the U.S. F-35 fighter planes. Turkey had originally ordered 100 F-35's from the U.S., however due to a flight code discrepancy only two were actually purchased,

The national aircraft project initiated upon a directive from Prime Minister Tayyip Erdoğan, has now reached the design stage. According to the information obtained, the domestic make planes will be built to have superior characteristics to the F-35's which are generally referred to as 'phantoms'.