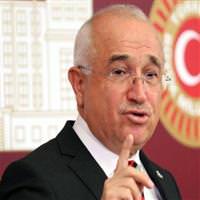 Speaker of the Parliament Cemil Çiçek sent a letter of response to an official invitation extended by Israeli Parliament Knesset Speaker Reuven Rivlin.

In the letter, Çiçek thanks the Israeli Parliamentary Speaker for his kind invitation yet states, "Your proposal will be evaluated when Turkish and Israeli relations have reached a state that would render a visit of this level favourable."

Çiçek's letter of response also included the statement, "I am sure your side is aware of our expectations for relations to normalize."