‘Turkey was set up’ 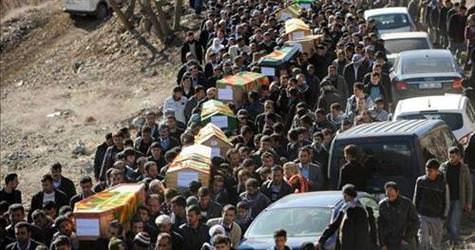 A report on the Uludere incident in which 34 villagers were mistaken for terrorists, states that the incident was entirely a ‘set-up’ and that certain nations may have been involved.

A number of significant findings have surfaced in a report prepared on the investigation into the Uludere incident that was sent to the Prime Ministry.

According to information obtained by SABAH, the Uludere Report has determined that the incident was a 'conspiracy against Turkey'. According to findings, certain nations may have played a part in the Uludere incident and suspicions are circling around two specific regions. The report also asks the questions; "How did this event happen and who did it benefit?" The report also provides a series of suggestions including determining, "The potential results of the incident, the basic findings of the event and suggestions for a solution."

A TRAP WAS SET-UP

The report states that the Uludere incident was a complete 'set-up' and states, "
"Even though when we look with the naked eye it appears that the villager-smugglers were bombed by war planes, it is of no doubt that we are face to face with a much deeper issue."
The report includes the following; "There is a power beyond the PKK that is playing a role here as in the case of the Hakkari and Çukurca attacks. The set-up of this event reveals it was a professionally prepared plan of action."

The report includes statements from a number of PKK members that have outside connection and are used by certain nations. "There a few nations in the region that could contrive this magnitude and type of an event," they state.

In reference to the Hakkari incident in which eight soldiers were killed from mines that had been set-up in the road, it is emphasized, "As is evident from the Hakkari incident the prompting and logistics received from these countries made the incident possible." The report includes the statement, "There are two nations that would be able to design an incident of this type and magnitude."

The report also provides a five-item solution plan in connection to the Uludere incident.

IMPORTANCE ON PERCEPTION MANAGEMENT: In the struggle against the PKK, more importance needs to be placed on perception management than on war management.

VILLAGE GUARDS NEED TO BE REHABILITATED: The village guard system needs to be rehabilitated and gradually dissipated. If the system cannot be eradicated then care should be taken to not hurt the village guard's pride.

PREVENTING SMUGGLING: The opening of the borders must be expedited and all those who enter and exit the country should be recorded. This way the state will both protect their citizens and will prevent the PKK taking taxes from smugglers.

PLATEAU PROHIBITION: The prohibition to enter plateaus needs to be lifted. Measures that encourage husbandry need to be enforced. Beekeeping is already spreading fast in the region.

COMPENSATION SHOULD BE PAID FOR VILLAGE EVACUATIONS: Citizens forced to evacuate villages should be paid compensation for terrorism and the villagers should be provided security.

ZONING IN ON THE TARGET
In the report it also emphasizes that the PKK wants to confine the government to a security paradigm and makes the following determinations: "This event benefited the PKK most and also was to the advantage of certain regional nations. For the PKK this incident was the kiss of life, following a recent series of successful operations staged against the PKK. The terrorist organization is knowingly retracting in order to spread the propaganda that they are 'preparing for spring' and intends to step by step confine the government to a security paradigm."

This article is a translation of an original article written by Yahya Bostan.