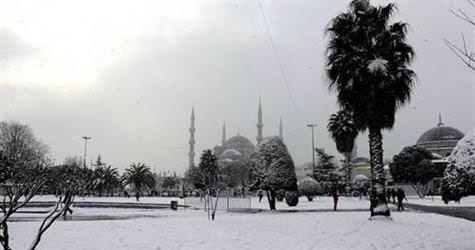 Istanbul is experiencing one of the worst snow storms in recent years. A number of flights and ferry services have been cancelled. Yesterday all business locations went on official holiday in the afternoon due to harsh weather conditions in the metropolis.

As of early this morning Turkish Airlines was forced to cancel a number of domestic and international flights. The cancellation of flights has led to passengers' distress, including an incident where one Iranian passenger, whose plane from Istanbul to Antalya was delayed for three hours, began attacking airline staff followed by punching in a window in the plane.

Istanbul's Sea Bus operators were forced to cancel a number of ferry services today due to the north-east winds. According to information obtained by İDO, this morning's 09:30 Bursa-Yenikapı-Kadıköy ferry was cancelled and this evening's Bandırma-Yenikapı will also be cancelled. In addition this morning's Bandırma-Yenikapı-Bostancı, Yalova-Yenikapı, Armutlu-Yenikapı-Bostancı and the Eskihisar-Topçular car ferry were also cancelled due to heavy winds.

Heavy winter conditions are being experienced throughout the country. In the Eastern Anatolian region, a number of village roads have been closed off to access. The airport in Hatay has been shut down until February 7th, due to extreme flooding.

The heavy snowfall and minus degree weather is anticipated to continue in Istanbul until February 6th.