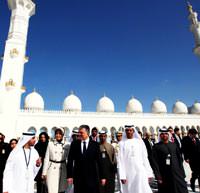 President Gül commented on the potential of the Arab League directing the Syria issue to the United Nation Security Council, by stating; “They tend to arrive to other countries from afar in order to intervene in such events. This time, regional nations are stepping out to protect their own.”

President Abdullah Gül visited Abu Dhabi, the capital of the United Arab Emirates yesterday. During his stay, he first paid a visit to one of the largest mosques in the world, the Sheikh Zayed Grand Mosque. Upon his arrival to the mosque, Gül went to pay his respects to Sheikh Zayed Bin Sultan El Nahyan's mausoleum. Founder of the UAE and former State Leader El Nahyan passed in 2004.

Gül later spent time closely inspecting the interior of the grand mosque. The mosque also contains a series of works from Hattat Hasan Çelebi, the recipient of the Presidential Grand Award for Culture and Arts. Çelebi, who was amongst the committee accompanying President Gül, relayed information on his works on display. Gül was also accompanied by his wife Hayrünnisa Gül, Foreign Affairs Minister Ahmet Davutoğlu, Minister of Finance Mehmet Şimşek and his wife Esra Şimşek and UAE Minister of Economy Sultan Bin Said Monsuri.

During his trip, Gül met with UAE State Leader and Abu Dhabi Emir Sheikh Khalifa Bin Zayed El Nahyan. Shiekh Khalifa expressed his pleasure with Gül's visit and the importance they place on relations with Turkey, while Gül emphasized the importance relations with the Gulf nations are for Turkey. Following the meeting, which was closed to the public, Gül went on to attend a lunch held in honor of Sheikh Khalifa. Afterwards, Gül toured Masdar City, the first-ever ecological and self-sustaining planned city, which is currently under construction.

During Gül's UAE trip, he responded to a question posed by a journalist regarding the issue of the Arab League bringing the Syria issue to the United Nations Security Council. "We are pleased that the Arab League has stepped up in its region. In general, they come from distant countries to intervene in these issues. This time regional nations are stepping up for their own region. We support this. I want everything to develop in a manner that will benefit the Syrian public and pave the way for happiness."


Gül later met with Turkish correspondents, where he relayed that the meeting held with UAE State Leader and Abu Dhabi Emir Sheikh Khalifa was very productive. Gül also stated that during his meetings in Abu Dhabi, the subject of Turkish television series which are broadcasted by UAE television stations was regularly brought up. Gül shared that he was jokingly asked, "Tell us what happens in the end; otherwise we will not be able to pull our wives away from the television." Meanwhile, Gül also explained that when he met with students from Zayed University, the subject of the 'Magnificent Century' television series also surfaced, and he states, "They are all watching this television series."