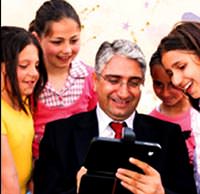 The Ministry of National Education is working on the final details for the Fatih Project. The delivery of tablet computers to students, which is the most significant aspect of the project, has already begun. Thus far, 8,800 tablets have been sent to 52 schools in 17 different provinces.

Innovation and Education Technologies General Manager Mahmut Tüncel, who has taken on the directorship of the ministry project, states that with this project, 300 years of backwardness will be buried in history.

Explaining that he has received a variety of criticism on the project, Tuncel states, "We have shaped this project by considering all of the potential hitches. Our students will be able to compete with the rest of the world. Teachers constitute the main resource for this project and we will be expediting their training."

DISTRIBUTION HAS BEGUN
Tuncel states, "This project foresees transforming every component of national education. It will make things much easier for teachers." Following a tender held by the ministry, a pilot series of 4,000 General Mobile e-tabs, 4,800 Samsung Galaxy Tab wifi tablet computers were set-up. These computers have been distributed to 52 different schools in the Ankara, İstanbul, İzmir, Balıkesir, Bingöl, Diyarbakır, Erzincan, Erzurum, Hatay, Kayseri, Karaman, Kocaeli, Mersin, Rize, Samsun, Uşak and Yozgat provinces. Teachers will be distributed 2,200 tablets. In addition, a number of philanthropists will be donating 5,000 tablet computers to the Ministry of National Education in March. These computers will only support wireless internet connection and will not have 3G support systems.

The tablet computer systems will be integrated into the new smart board's which will also be distributed to state schools throughout the nation. In addition, teachers will also be given tablet computers, providing them the capability to track whether students are following the class in progress. Tablet computers have already been distributed to the following schools in Istanbul: Kartal Anadolu, Üsküdar Hacı Sabancı, Ataşehir Mehmet Rauf, Bahçelievler Social Sciences, Fatih Yedikule, Bağcılar Naci Ekşi and to freshmen at the Beyoğlu Eseyan Armenian High School.