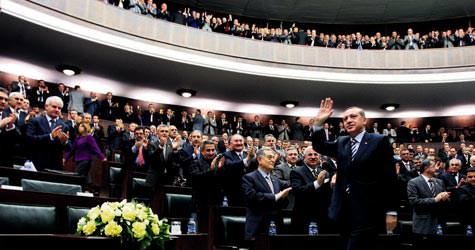 Prime Minister Erdoğan laid into France for its acceptance of the Armenian bill. “The France of Sarkozy’s administration is based on dogma, biases and delirium.”

Prime Minister Tayyip Erdoğan slammed France in his Address to the Nation last night by delivering the following messages:

FRANCE IS HAUNTED BY THE MENTALITY OF THE MIDDLE AGES: "Unfortunately a civilization that brags of being the pioneer of enlightenment is now led by a dark Middle Ages mentality. The France, which once aimed to form a union in order to prevent conflict in Europe following the Second World War, today speaks a language of discrimination, racism and conflict. The France of the Age of Enlightenment was the center of intellectualism, however the France of Sarkozy's administration is based on dogma, biases and delirium."

STEPPING ON EUROPEAN VALUES: "We have issued the necessary threats to France. With the approaching election, Sarkozy seems to have no problem stepping on European values all for the sake of a few thousand votes by Devshirmeh." Erdoğan's reference is to the Christians conscripted to join the janissaries during the Ottoman Empire.

"I have said it before; this bill that was accepted by the French National Assembly and Senate is non existent for us. By attempting to rewrite history in the parliament, Sarkozy's France is forcing open a door to a very dangerous era. Therefore, as Turkey, in order to stop watering this poisonous vine sprouting in France, we are asking our French comrades and the French public to raise their voices."

SAY 'NO' TO THIS ANIMOSITY AGAINST TURKEY: "I believe that the conventional wisdom inherent in France will say stop to this trend of racism and discrimination led by Sarkozy and to the animosity towards Turkey. Turkey is a great country and will act in accordance to this greatness. It will take on stances according to the course of developments and we will implement sanctions in stages."