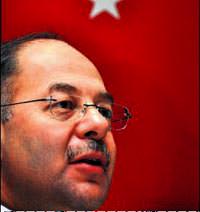 "We place high importance on children’s health and rights, states Akdağ. “The fact that we can not deliver medicine to Gaza is an affront to humanity.”

Explaining that they have been unable to deliver medicine to Gaza, Minister of Health Recep Akdağ addressed Israeli officials by stating, "To prevent the delivery of medicine, medical supplies and aid to sick patients who need them is a crime against humanity."

Akdağ was speaking at a press conference held on the joint report released with UNICEF entitled "Humanitarian Aid Incentive for Children 2012 Report" when he delivered the following messages:

As Turkey, we are extremely invested in the medical transition program and in children's health and rights.

An article released on January 26th in England's The Guardian says that other nation's have a lot to learn from the humanitarian aid Turkey delivered to Somalia. This is something the Turkish public should be proud of, because we are an example to the world of humanitarian compassion. For as long as there is a need, these types of aid will continue.

It has been nearly three months that we, the Turkish Republic, have been trying to send medicine to patients in need in Gaza. Unfortunately however, it has practically turned into an open-air prison and we are unable to deliver this medicine. This is an affront to humanity. I would like to address the Israeli authorities: To prevent the delivery of medicine, medical supplies and aid to sick patients who need them is a crime against humanity. This incorrect stance must be changed.