Turkey is a favorite for Middle Easterners 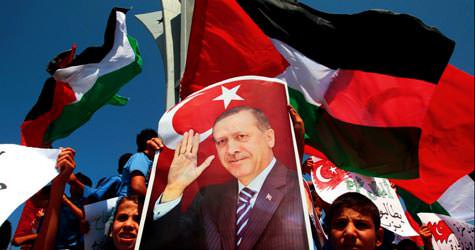 The study, entitled 'Turkey's Perception in the Middle East 2011' conducted by the Turkish Economic and Social Studies Foundation (TESEV) revealed a series of surprising findings. The survey was conducted from October 19th to December 15th, 2011 in Egypt, Jordan, Lebanon, Palestine, Saudi Arabia, Syria, Iraq, Tunisia, Oman, Bahrain, Qatar, the United Arab Emirates, Iran, Kuwait, Yemen and Libya. The 2,323 participants were either questioned over the phone or in person. The results of the study were released by TESEV Chairman Can Paker, and Mensur Akgün and Sabiha Senyücel Gündoğar, who were in charge of conducting the research.

MOST FAVORED COUNTRY
Sixty-two percent of the participants in the survey stated that they are optimistic towards the future. Sixty percent surveyed stated that they considered the effects of the Arab Spring to be positive. The percentage of those questioned who feel positive about their own countries has risen to 52%. While 75% of those question supported participating in public uprisings, only 20% found it acceptable to attend violent demonstrations.

Turkey was selected as the most popular nation in the Middle East by 78 percent of those questioned. Turkey was followed by the United Arab Emirates. Turkey was least favored by Syria, with only 45 percent participants selecting Turkey. With a 47 percentile, Israel was considered the nation to pose the biggest threat, while 24 of those surveyed selecting the United States.

Speaking at a meeting held to release the study's findings, Paker explained that participants from Syria may have been concerned for their safety. "Turkey is the country that nations in the region use as an example."

TURKEY SHOULD PLAY A BIGGER ROLE
Seventy-seven percent of those surveyed believe Turkey contributes the most to peace in the Middle East, while 71 percent state that Turkey needs to play an even bigger role in the region. In response to the question, "Could Turkey be a successful model for countries in the Middle East," 61 participants stated 'Yes', while 22 stated 'No'. Sixty-seven percent think that "Turkey represents a successful union of Islam and democracy."

Thirty-two percent of participants that stated they consider Turkey to be a model nation due to its democratic regime, while 25 percent stated it was due to the nation's economy and 23 percent claimed it was for the importance placed on its Muslim identity. When asked which nation would be the region's economic leader in ten years' time, 25 percent choose Turkey, 16 percent selected Saudi Arabia and eight percent chose the UAE.