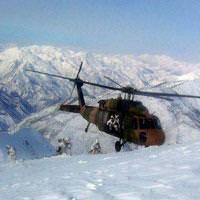 The Turkish Armed Forces has staged an air strike on PKK camps in Northern Iraq. The General Staff has announced that Air Forces have hit three hide-outs belonging to the terrorist organization.

An announcement released on the General Staff website states the following: "Based on exploration and target analysis conducted in the northern Iraqi region, three targets (shelters) belonging to the terrorist organization were located in the Zap region and successfully struck by aircraft belonging to Turkey's Air Forces on February 3rd, 2012. Having successfully completed their mission, our planes have returned safely to their base."

In another incident, gendarmerie and Special Forces teams staged a joint operation in Batman based on intelligence analysis and killed five PKK terrorists in a cave. The operation took place yesterday morning at 7:30 am in a cave located in the rural region of the Günyayla village in Kozluk. According to the information obtained, a higher level member of the terrorist organization was killed in the attack. A kilo and a half of explosives were confiscated from the cave in addition to a Dragunov sharpshooter and other automatic weapons as well as hand grenades.

Meanwhile, the Batman Governorship expressed that certain media organs have released the news that the operation was staged by Batman police. "However," they clarified, "This information does not reflect the truth; the operation was successfully executed by teams from the Batman gendarmerie and police special forces."