AK Party’s votes are up in latest surveys 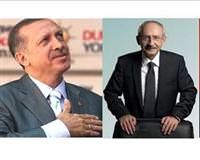 The results of ANDY-AR’s Social Research Center survey on Turkey’s current political outlook for January have been released.

Amongst the questions asked of 2,862 participants from 21 different cities included, "If there was an election this Sunday, who would you vote for?"

ANDY-AR Chairman Faruk Acar offers up his analysis of the survey results:

According to the ANDY-AR survey, 53.7% stated that they would vote for the AK Party, and nearly half of those voters stated their reason for the preference as being 'Stability'. Although this term is generally attributed to those in economic circles, the fact that is brought up by almost half of the AK Party's voters is noteworthy.

CHP was selected by 21.1% of those surveyed and 62.2% of that figure stated the reason for their preference as being 'ideology'. These results show that the left and social democratic voter continues to display their support for CHP.

While whether or not MHP would have enough voters to make the electoral barrage was a debatable issue prior to the June elections, they came through with 13 percent of the vote. According to the survey, 15.6 percent of participants stated they would vote for MHP now and listed their reason as being 'ideological.' This displays the integration of MHP voters with the national tendencies the party holds in the forefront.

BDP was selected by 5.9 percent of participants. From time to time there is debate of whether the BDP is in fact a Turkish party. BDP, whose MP's entered the election as independent candidates, stands out in the survey for being a party completely engaged in Kurdish policy.

With the 16.9 percent of participants stating that they would vote for the AK Party due to its ideology, it could be assessed that the AK Party represents the conservative, religious-minded segment in Turkey and that is why they receive the vote.

The 11.5 percent of participants that selected CHP for being "the strongest opposition," could be considered as a sign that voters could be directed to a "stronger oppositional party'. The same interpretation could be attributed to the 6.5 percentile of voters for CHP who stated that they would vote for the party because there are no other alternatives.

The number of MHP supporters who described their reason as being "To establish a balance against the party in power," was at the 18.3 percentile. While this priority only existed for 5.1 percent of CHP supporters, the fact that it is so high for MHP voters displays the discomfort felt by nationalist voters in regards to the AK Party.

It may be best to attribute the BDP supporters' preference of "ideology" to being ethnic based more so that politically based. The fact that 25.2% percent of BDP supporters explained the reason behind their support as being "because they represent Kurds" is a clear indicator. Meanwhile, 4.6% of BDP supporters stated their reasoning as being due to a "lack of an alternative". The fact that both MHP and BDP tend to conduct politics based on "Turkish" and "Kurdish" nationalism, respectively, and do not have the numbers of voters that the AK Party and CHP do, clearly depicts that they do not represent the general voter.

The fourth place preference at 15.2% for AK Party voters was Prime Minister Erdogan's "Actions", which he also regularly refers to. The fifth reason 10.9% of AK Party supporters said they would voted for the AK Party was due to the lack of an alternative. The reality that this figure alone could surpass the electoral barrage was also of note.

The fact that 5.1% of CHP voters stated their reason for voting for CHP as being "in order to establish a balance against the party in power", could be assessed that these voters are skeptical of political Islam, the center-right, conservatives or also directly the AK Party. Meanwhile, 4.8% stated the reason for their preference of CHP as being due to "its origins with Atatürk."