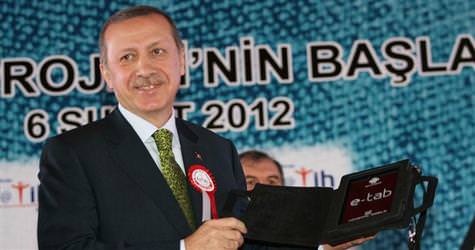 Prime Minister Erdoğan kicked off the highly-anticipated FATİH Project with a ceremony held in the capital.

Speaking at the ceremony held for the initiation of the national education's FATİH project, Recep Tayyip Erdoğan stated; "Fatih Sultan Mehmet conquered Istanbul and put an end to a dark era, the Middle Ages, and went on to start off a new era.
With the FATİH project, we are also closing an era to embark upon a new one.
However, we are not just bringing an end to an era in the education system, we are ending an era that encompasses all areas that have been affected by the educational system and together today we are embarking on a new era, an era of knowledge and information technologies."

Noting that the entire world is watching this project unfold, Erdoğan states, "Today, the FATİH project kicks off in 52 schools in 17 provinces. Hopefully by September this year, 3,657 schools, in other words half of the high schools in Turkey, will have completely been integrated into the FATİH project. Within the next four years, the project will have been realized in 42,000 schools and 570,000 classes. This includes the addition of 620,000 smart boards in classes, libraries, laboratories and teacher's rooms."

'WE LIVED IN GRIM CONDITIONS'
In discussing the strides made in education today, Prime Minister Erdoğan, provided examples from his past.

"We had no boots, no notebooks, no erasers or pens. Never mind computers, we didn't have enough gas to have light for us to study. So many children in this country… of course our children now do not know this… would use the inside of a bread loaf for an eraser. We would use a pencil down to a stub. We experienced times like these. Our memories of school are filled with the aroma of cow dung. We are a generation that experienced these grim conditions to our core. We experienced these grim conditions at vocational schools and at universities. There were obstacles placed in front of teachers and learning in general. They built walls we had to overcome."

Name: FATİH Made in Turkey
Named after the conqueror of Istanbul Fatih Sultan Mehmet, like the famous sultan, the FATİH project also aims to open a new era. With the initiation of the FATİH project, classes will receive smart boards, students will receive tablet computers and classes will be enriched with the use of e-books. The project has been completely designed by Turkish engineers.

* WHAT IS THE FATİH PROJECT?: All state schools spanning from preschools all the way to high school level will receive a total of 620,000 smart boards, while tablet computers will be distributed to 17 million students and approximately one million teachers and administrators.

* WHAT IS A SMART BOARD?: Teachers and students will be able to download lesson content from the Ministry of National Intelligence data center onto both smart boards and tablet computers. In addition, smart boards will also provide the opportunity to teach lessons using sounds, animation, video, graphics, three dimensional film and other options.

* WHAT WILL TABLETS CONTAIN?: The tablet computers which will be distributed to students, will be loaded with e-books. In addition to books, tablets will include all class lessons, sounds, animations and graphics.

* WHAT ARE DANGEROUS SITES?: Both teachers and students will be restricted from entering all websites. Only websites that have been selected by educators and specialists and passed through the Ministry of National Education's filtering system and deemed harmless will be granted access.

* WHAT HAPPENS IF A STUDENT PLAYS GAMES IN CLASS?: Teachers will be able to check on their own tablets whether or not a student is following the course. If a student is found straying from the lesson, teachers will have the capability to lock a student's computer.

* HOW WILL TEACHERS BECOME ORIENTED WITH THE PROJECT?: Approximately one million teachers and school administrators will undergo five days of training on both the smart boards and tablets.

* WILL THE INTERNET CONNECTION BE SUFFICIENT?: The Internet connection will be wide band set up by fiber optic cable. In addition, students will be able to study at home with wireless internet. Village schools that do not have cable connections will connect through wireless internet service.

* SOFTWARE PROTECTION AGAINST SALES: The tablet computers will shut down automatically if they go two weeks without accessing a smart board.