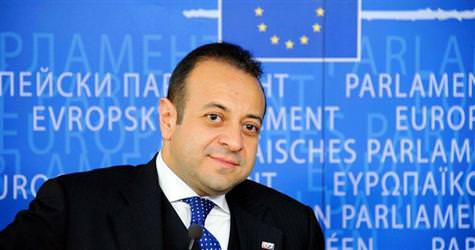 Swiss officials have begun an investigation into a statement made by Turkish EU Minister Egemen Bağış upon his return from the Davos World Economic Forum. "There was no Armenian genocide. Let them come and arrest me." The investigation is based on the Swiss code's anti-racism laws, which prohibits the denial of genocide.
According to news released in the Swiss Neue Zürcher Zeitung newspaper, the Zurich State Prosecutor has opened an investigation into Bağış's denial of genocide, based on item 261 of the Swiss Criminal Code on antiracism.

On December 26th, Swiss Confederation Chairman and Minister of Foreign Affairs Micheline Calmy-Rey had stated at the Fourth Ambassadors' Conference in Ankara, that unlike France, Switzerland does not have legislation that considers specific events to be genocide. Speaking to Turkish ambassadors that are assigned to countries all over the world, Rey stated, "The 261st article of the Swiss Criminal Code prohibits expressing openly racist statements and conducting propaganda. The Swiss Government has repeatedly reproached the tragic events which transpired in 1915."

Rey stated that the Swiss Government announced their official views in 2003 and there has been no variation since, and stated, "We want to underline the need for historians in Armenia and Turkey to research this incident and to contribute to an open debate based on the relevant findings."
Contrary to Rey's statements at the time, Minister Bağış is now facing a preliminary inquiry into whether or not he stated, "There was no genocide."

BAĞIŞ IN BRUSSELS
Egemen Bağış held a series of meetings with officials from the European Parliament and the European Commission today in Brussels. Amongst those Bağış was to meet with today was the EP's new President and Germany's Social Democratic Party Representative Martin Schulz, EP Turkey rapporteur Dutch Christian Democrat Ria Oomen-Ruijten European Commission for Enlargement and European Neighborhood Policy Stefan Füle.

DELVING INTO DIPLOMATIC IMMUNITY
State Prosecutor Christine Braunschweig affirmed that a preliminary investigation has indeed been opened into Egemen Bağış, and stated; "However, there are certain issues that need to be clarified, for example; diplomatic immunity."

STATEMENT REPEATED AT A CONCERT
The Swiss Armenian Community claims that Bağış made the statement in front of journalists at Davos as well as at a concert in Zurich. The Zurich State Prosecutor has since requested assistance from the police in order to determine whether or not Bağış made the alleged statement and if so, when and where he did so. According to information obtained, if the case does not fall within the Zurich State Prosecutor's jurisdiction, the file may be passed on to the Graubünden Prosecutor. The State Prosecutor has also applied to the Ministry of Foreign Affairs to determine whether or not Bağış has diplomatic immunity. The Swiss Ministry of Foreign Affairs will be providing information to the prosecutor on Bağış's status for both his Davos and Zurich trips.