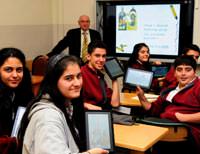 Students and teachers from Istanbul’s Özel Esayan Armenian High School are experiencing the excitement of the Fatih Project as the sole private school included in the pilot stage.

The only private school to be included in the 52 school pilot program for the Fatih Project, the Private Esayan Armenian High School has already integrated the tablet computers provided by the government in their classes. Students have expressed that having the tablets in class has made their lessons much more educational and enjoyable, while teachers are pleased at their student's increased interest in the lesson.

The Fatih Project was kicked off the day before yesterday by Prime Minister Recep Tayyip Erdoğan. Yesterday, the first series of 12,800 tablet computers were distributed to the 52 schools in 17 provinces that were selected for the pilot program. The Beyoğlu Private Esayan Armenian High School is the only private school that has been included in the pilot program. The 32 teachers in the high school and 45 students from the ninth grade class began their first classes yesterday with lessons integrated into the tablet computer and smart board system.

Students explained that the computer, which contains all of their course books and lessons with animation features, is a great convenience, while teachers commented that even from the first day of their integration, students are already displaying an increased interest in class.

According to Armenian teacher Maral Ebeoğlu Satar, the animated lessons that can be displayed via internet access on the smart boards has drawn students' interest which allows them as teachers to teach class even more effectively.

Geography teacher Zafer Kurtar states, "The trouble of writing on a board with chalk is over. Students are able to follow the subjects we are lecturing on through their tablet computers. We have already begun to feel the positive affects this is having on our students."

"IT IS VERY EXCITING"
School Principle Satenik Nişan states, "It is a very exciting, modern process. It is also extremely meaningful that our school was selected for the pilot program."

The students who have received the tablet computers are also pleased. Ninth grade student Linda Muratyan states, "Class passes by so enjoyably now. Everyone has their full attention on the teacher. Even if the lesson is difficult, we are able to easily understand it." Karolin Nas states, "The tablet computers have everything we need. We have been saved from having to carry around heavy backpacks. This has lifted a big burden off of us."

The "Fatih" project becomes the 'Conquerer'

According to the Democratic Educators Union (DES) General Chairman Gürkan Avcı, with the Fatih project, the Turkish education system has taken a revolutionary step for the future. "Over time, the Fatih project may turn into the "Conquerer Project". Avcı emphasized that they are in full support of the Turkish educational system reaching a high-quality and modern state and that this program will provide equality in education, will eradicate the obligation to attend additional tutoring or special courses and marks the end of an education system based on memorizing and tests.