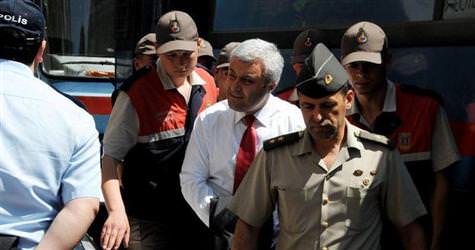 The European Court of Human Rights has accepted Tuncay Özkan’s application despite the fact that the suspect has not yet exhausted all routes of the domestic law, yet has rejected a number of his core complaints of being denied his right to a far trial and the protection of his freedom and safety in accordance to the European Convention on Human Rights.

The European Court of Human Rights (ECHR) will wait to proceed until the judicial proceedings of the case in Turkey have concluded, however they will evaluate Özkan's complaint in regards to his retention time in an interim decision.
The ECHR ruling expressed that the Ergenekon case is being tried by an independent and fair court and stated that there is "strong evidence" supporting the existence of the Ergenekon terrorist organization. The Strasbourg Court also rejected the plaintiff's request for trial without arrest by stating that it would "make it difficult for security forces fighting organized crime."

'THERE IS CONCRETE EVIDENCE'
The ECHR declared that the plaintiff was deprived of his freedom due to being held under the suspicion of being an active member of the Ergenekon criminal organization which aimed to topple the government through violent means. The court also stated, "Özkan had obtained a number of confidential documents that belong to national security forces, that he directed a television station established in order to broadcast programs devised by the Ergenekon organization and that it has also been determined that he was harboring a bomb on behalf of the aforementioned organization in his own home."
The court also referred to the existence of telephone transcripts that strengthen suspicions Özkan may have been receiving orders from the Ergenekon organization's military members and that the arrest by Turkish judicial authorities was based on "concrete evidence" and "legitimate reasons".