Erdoğan checks out in good health 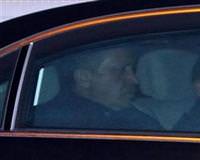 After undergoing the second and final phase of treatment for a digestive system disorder, Prime Minister Erdoğan checked out of the private Istanbul Medipol Hospital yesterday evening.

The civilian-plated car, which picked up Recep Tayyip Erdoğan, departed the hospital at 21:20 last night and headed straight for the Premier's residence in Üsküdar's Kısıklı district.

The Prime Ministry released an announcement stating, "Our Prime Minister has undergone the second and final phase of an operation on his digestive system. The procedure lasted 30 minutes and marked the end of his planned medical treatment. Our Prime Minister is in extremely good health and he plans to return to his routine schedule within the week. "