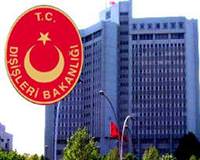 The announcement released by the Turkish Ministry of Foreign Affairs stated the following: "On February 13th, a bomb attack was staged on a vehicle belonging to the Israeli Embassy in New Delhi, India which wounded two people. Georgian authorities prevented an attempted bomb attack on another vehicle belonging to the Israeli Embassy in Tbilisi.
Turkey is against terrorism no matter what its justification or source. In this regard, we condemn these attacks and wish those injured a speedy recovery. "