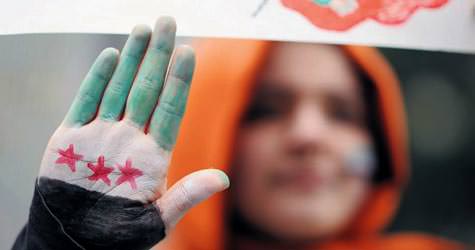 Turkey’s preference is to deliver humanitarian aid to Syria via a ‘Mediterranean corridor’ rather than setting up a route through its own territory which would present not only security risks, but also the need for a mandate.

As the circle continues to close in on Syrian State Leader Bashar al-Assad, deliberations on how to determine a route to deliver aid ensues. Ankara has expressed that they are not in favor of establishing a corridor in Turkey and would prefer to use the Mediterranean as a route to deliver aid. Syria's approval would be required for a humanitarian corridor established through Turkey; however the Damascus administration is not expected to deem the option favorable. Therefore, the issue of establishing a humanitarian aid corridor is also on the agenda alongside international intervention. In order to determine a humanitarian aid route, an air or land corridor is necessary; however Turkey is absolutely against an operation similar to what transpired with Iraq being staged on its own territory. Due to the security risks involved in this situation, the issue of a military mandate for Turkey would be brought to the agenda. Foreign Affairs Minister Davutoğlu has already relayed his concerns to U.S. Secretary of State Hillary Clinton. Ankara is in favor of a humanitarian aid corridor being established via the Mediterranean and suggests that instead of designating a route through Turkey, the British base in Cyprus be used for this purpose. The United States does not want to send the sixth fleet to the Mediterranean before the elections.

Prior to the upcoming critical meeting in Tunisia, Davutoğlu spoke with Qatar's Foreign Affairs Minister Halid Bin Muhammed El Attiyah over the phone, where he was briefed on the Arab League's preparations for the February 24th meeting.

Meanwhile, Ankara still believes that the route to ensuring Syrian State Leader Bashar al-Assad steps down is still through U.N. intervention. How this will transpire will be determined at the February 24th Friends of Syria Group meeting in Tunisia, followed by the U.N. making the final call. Ankara's preference is for the meeting in Tunisia to produce a decision involving the U.N. Charter's Chapter 7, which allows the UN Security Council to 'intervene' in order to restore international peace and security' and in opening a humanitarian aid corridor through the Mediterranean.
According to the most recent information received in Ankara, the number of soldiers that have abandoned the military and escaped to villages has reached 40,000. If Russia were to join the international community and say 'yes' to exerting pressure on Assad, then it is deemed most certain that he will no longer be able to remain in power. With the increasing number of civilian losses, efforts have been increased to influence Russia to agree to a UN resolution. At present, Chapter Six of the UN Charter, which stipulates, 'The Peaceful Settlement of Disputes' is being deliberated by the UN as a means to compromise with the Assad regime. Chapter Seven allows the Council to "determine the existence of any threat to the peace, breach of the peace, or act of aggression" and to take military and nonmilitary action to "restore international peace and security".
CHAPTER 7 IS IN FAVOR
Ankara and the West would prefer the Chapter 7 option of "international intervention for humanitarian purposes" be included in the resolution reached.


French Minister of Foreign Affairs Alain Juppe has since reiterated his proposal to the UN to establish a humanitarian aid corridor for Syria. Speaking on a France radio station, Juppe expressed the need for the UN Security Council to deliberate the corridor option and also stated that they have been in contact with Russia in regards to establishing a new resolution draft. The new resolution draft to be presented to the council is expected to be more involved than the prior two drafts vetoed by Russia.

PREPARATIONS WITHOUT RUSSIA
While it is still indefinite whether or not Russia and China will attend the upcoming meeting in Tunisia, their participation is expected to be determined according to the manner of the invitation extended. If the invitation includes the expression that the meeting is being held to 'realize the Arab League's latest proposal on Syria,' then Russia and China are not expected to attend. Ankara feels that if the invitation is extended in this manner, then a much more grave decision may be reached in Tunisia. Russian Foreign Affairs Minister Sergey Lavrov has expressed that Syrian approval and halting the violence in the region are conditions that must be met.