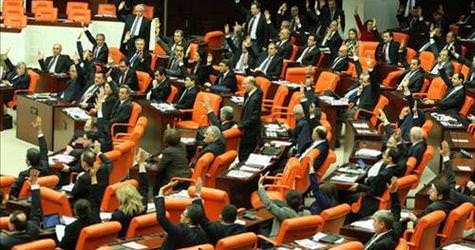 After a 13-hour marathon parliamentary session, a new law has been established which stipulates that with the prime minister’s approval, it will now be possible to open an investigation into members from Turkey’s National Intelligence Organization(MİT) in connection to offences committed in the line of duty.

Commenting on the issue, Deputy Prime Minister Bekir Bozdağ states, "A smear campaign on the national intelligence service has begun from both inside and outside of the country. It is all slander. The Turkish Parliament will not allow the National Intelligence Organization to be worn down. Our national security is the responsibility of those democratically elected to power."

The law which was accepted by the Assembly was sent to Çankaya Palace at 14:00 yesterday afternoon in order to be presented to President Abdullah Gül for his approval. According to the constitution, the president has a 15-day review period; however Gül approved the law at 19:00 yesterday, just five hours after its arrival.

The fact that Hakan Fidan, the Undersecretary of the National Intelligence Organization had been called in for questioning as a suspect had surfaced serious backlash, resulting in what has been described as a 'crisis'. Both the statute and the case file will be presented to Prime Minister Tayyip Erdoğan. If Erdoğan does not grant his permission, the investigation will be thrown out. Meanwhile, it is also common knowledge that since 2004, Prime Minister Erdoğan has responded affirmatively to requests for investigations into four other MİT members.