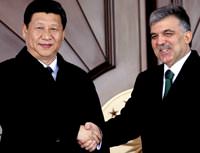 China’s Vice President Xi Jinping arrived to Turkey on the final stop of a trip that took him to the United States and Ireland. Greeted like a ‘friend of forty-years’, Jinping first paid a visit to the Atatürk Mausoleum and later met with Speaker of the Parliament Çiçek. Jinping was received with an official ceremony held by President Gül; they shared a meal and went on to sign seven separate agreements.

With a forty-year history of friendship behind them, yesterday's visit, paid by leader-in-waiting Xi Jinping, elevated Turkish and Chinese relations to a whole new level.
China's Vice-President Xi Jinping was greeted in the Çankaya Palace like a 'friend of forty years'. Jinping's three-day official trip to Turkey started off with a visit to the Atatürk Mausoleum and later Jinping moved on to meet with Speaker of Turkey's Grand National Assembly Cemil Çiçek in his office. An official welcoming ceremony was held for the visiting vice-president who was greeted at his vehicle's door by President Gül. Before the two state leaders went on to hold a meeting, Gül offered a description of Ankara to Jinping from the Palace balcony. A total of seven separate agreements were signed during Jinping's stay.

Visiting Atatürk's Mausoleum
Jinping's first stop in Ankara was to pay a visit to the Atatürk Mausoleum. Along with his accompanying committee, Jinping laid a wreath on Atatürk's grave and a moment of silence was held. Jinping later signed the special guest book in which he wrote in Chinese, 'Long live Mustafa Kemal Atatürk, the founder of the Turkish Republic."

Later, Jinping went on to meet with Speaker of the Parliament Cemil Çiçek, who qualified the event as a historical meeting which will benefit Turkish and Chinese relations, the region and the entire world. Reminding that this trip marks the first time a Vice President from China has ever visited Turkey, Çiçek states, "I believe that this trip will contribute special meaning to our relationship. Turkey has embraced China's policy and is a nation that accepts the People's Republic of China's hegemony and territorial integrity."

TGNA WEBSITE IN CHINESE
It was revealed during Jinping's trip that Turkey's Grand National Assembly was planning to make a very special gesture for China. Expressing the hope that relations between parliamentarians from the two countries fruition, Çiçek revealed plans to translate the assembly's official website in Chinese. Jinping in return explained that relations between the National People's Congress and Turkey's Grand National Assembly have intensified and that they do share their mutual experiences.

"A PEACEFUL PLACE"
Upon Jinping's arrival to the Çankaya Palace, President Gül gave the Chinese Vice President a short description of Ankara from the palace balcony. Gül mentioned that they were presently standing in one of the highest points in the capital and that in 1923, Ankara was just a small Anatolian town that now surpasses four million in population.

Gül also went on to explain that skyline of high-rises that surround them are changing every year. Jinping responded by stating, "This is a beautiful peaceful location surrounded by trees and is the type of surroundings I like very much."

After holding both one on one and joint committee meetings, seven agreements were signed between Turkey and China. Following the signing ceremony, President Gül held a lunch in Jinping's honor. Deputy Prime Minister Ali Babacan, Minister of Economy Zafer Çağlayan, Minister of Energy and Natural Resources Taner Yıldız and approximately 60 businessmen, including Çalık Holding Chairman of the Executive Board Ahmet Çalık attended the meal.

HARVARD BONDING
President Gül and Jinping exchanged a number of personal chats including discussing their children's education. Gül shared with Jinping, whose daughter is studying at Harvard, that his own son is a Harvard student. It turns out, Gül and Jinping's children enrolled in Harvard at the same time. Gül's son Mehmet Emre was admitted to Harvard in 2010 with a record grade point average. Jinping's daughter Xi Mingze was also accepted to Harvard in 2010.

Jinping thanked President Gül for his contribution to the advancement between the two nations and stated, "We place high importance on relations with Turkey and you have a lot to do with its development." In 2005, Gül went to China as the Minister of Foreign Affairs. Just four years later, in 2009, Gül became the first Turkish President to visit China.