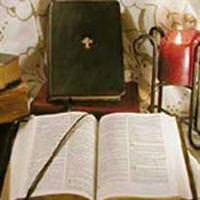 The Vatican has requested to see a 1,500 year-old Bible, which was found in Turkey.

A bible written 1,500 years ago with Jesus' original gospel written in the Aramaic and Assyrian alphabets and stated to be of 40 million liras in value, was held up in the vault of an Ankara Courthouse for the past eight years. It has since been handed over to the Ankara Ethnography Museum in police custody. Most recently however, Pope Benedict XVI has requested the book to closer inspect and research its content.

TURKEY DISCOVERED THE BOOK IN 2000

The Bible was recovered from a criminal organization based in the Mediterranean in an anti- smuggling operation that took place in 2000. The Bible manuscript is written on leather and is in Aramaic using the Assyrian alphabet' all elements exclusive to the specific time period it is attributed to. There have been buyers interested in paying up to three to four million liras just for a photocopy of a single page in this particular Bible.
The smuggling organization was tried by the district court and the Supreme Court of Appeals has approved the sentences charged. The items confiscated in the operation were handed over to the police at the time. They determined that the Bible had no rightful owner and then handed it over to an Ankara Courthouse.

The Vatican harbors certain sensitivities in regards to historical Bibles and supposedly has made a request to inspect this specific Bible being kept in Turkey, most currently at the Ankara Ethnography Museum. The fact that it is written in Aramaic is of special significance as it is known that that was the language Jesus spoke. In present day, Aramaic is only spoken in a village near Damascus, Syria.

This particular Gospel of Barnabas Bible, which is known to have two copies in print, is especially significant for Muslims due to its foresight of the coming of Prophet Muhammad. This particular version, which the Christian Church has accepted as existing, yet denies elements of its content, was first published in English in Pakistan in 1979. It was later translated from English into Turkish.
Its knowledge surfaced in Turkey in 1980, in an article released by Zafer magazine. The Bible became a topic of discussion for days following. The world became familiar with this particular Barnabas Bible's existence following microfilms of a transcript of the Bible taken in the U.S. was recovered in a raid in Pakistan.

A NOVEL RELEASED ON THE HAKKÂRİ BIBLE

The surfacing of this ancient text from the vaults of an Ankara courthouse has brought to mind the revealing of other Bibles uncovered in Turkey. Undoubtedly the most important of which was the Bible that was found in a cave in Hakkari in 1980. Once this particular Bible was found it never surfaced again, From time to time, news surfaced in the press insinuating the Bible, which was written by Jesus' disciple Barnabas, was being kept by the General Staff Special Forces Command. A writer, Aydoğan Vatandaş has written a book entitled "Barnabas' Secret" devoted to the historical finding. Speculations on this particular Bible uncovered in Hakkâri have yet to come to an end. It has been said that it's surfacing would be equivalent to Christianity having to re-write history. At the time, military officials photocopied the first page of the Bible and sent it to Istanbul. As a result it was revealed that this copy was also written in Aramaic. However since then, no historian has had the opportunity to inspect or even see the Bible in its entirety.