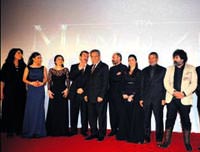 Once a prohibited poet, Ahmed-i Hani's poetic work Mem-u Zin was first translated as a book from Kurdish into Turkish and then later was adapted for the screen by TRT 6.

Held at the Rixos Hotel, last night's premiere gala for "Siya Mem-u Zin", which translates to 'In the Shadow of Mem-u Zin', brought out high level members of the state. Deputy Prime Minister Bülent Arınç, Minister of Finance Mehmet Şimşek, Minister of Defense İsmet Yılmaz and Minister of Food, Agriculture and Husbandry Mehdi Eker all gave a thumbs up to Turkey's first television program shot and broadcast in Kurdish. During his address at the gala, Minister Eker started off speaking in Kurdish and later switched into Turkish.

Eker explained that Ahmed-i Hani holds a very special place in his life and stated, "For a while, Mem-u Zin would be told along with a series of secretly hidden legends. There were even times when if someone was caught with a copy of the tale, they would be forced to endure torture. The point we have reached now is an extremely important development."

Deputy Prime Minister Arınç states, "We will break free from this terrorism curse, which we all complain of, by getting to know each other better and by holding one another in high esteem."

Adapted from the famous work by Ahmed-i Hani, which was completed in 1964, "Siya Mem-u Zin" is produced by Aytekin Mert and directed by Yusuf Güven. The series stars Cem Kurtoğlu, Süleyman Karadağ, Bilal Yörük and Yaprak Durmaz.