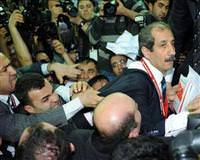 Sunday’s 16th extraordinary CHP congress at the Ankara Arena Sports Hall was marred by debates over whether the party administration had managed to secure enough delegate support to convene the meeting or not.

CHP Mersin Deputy İsa Gök was forced out of the hall after attempting to contest the congress' legality, claiming that the quorum had not been met to hold the congress.
CHP Mersin Deputy İsa Gök states, "They just couldn't hold this congress. They turned it into something unlawful and subject to cancellation." Gök was one of the main deputies to contest the number of MP's present versus the number the party submitted which resulted in uproar and his removal from the conference hall.
Gök was speaking to the press following his ejection from the hall, when he was asked whether he had exited on his own will. Gök responded, "I was forced to leave."

According to Gök, there were 583 delegates present, while the required number of 625 delegates was not. The congress was held regardless, and according to Gök, it was done so with a series of fake signatures.
Mentioning that the petition he submitted regarding the insufficient number of delegates was also not accepted, Gök pointed out that it was due to the lack of signatures the Congress was started later than scheduled.
Gök stated, "When the Party Chairman opened the Congress there were 583 delegates present and not even 600. If the required quorum is not present in the first meeting, then the location, date and time of the second Congress must be released. However, because the General headquarters refrained from releasing such information, the entire meeting should be cancelled. This is the extent of not knowing the law."
When asked, "Will you take this to the judiciary?" Gök responded, "The law is evident. I am yelling now to warn the Party Chairman. I am submitting a motion. However the Council Chairman doesn't pay heed, no one even looks at it, not even the Party Chairman."
Characterizing himself as a true CHP member, Gök states, "They just couldn't hold this congress. They turned it into something unlawful and subject to cancellation. No one can make my party experience such disgrace, not even the Party Chairman..."
Gök explained that he was just trying to serve his party, "However", he states, "There was an error made and I was trying to warn against this, yet they removed me, by kicking, fighting, swearing and ripping my jacket. What about democracy," asks Gök.