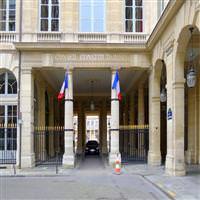 France's Constitutional Council ruled on Tuesday that a new law, that would make it illegal to deny Armenian allegations that what transpired in 1915 was ‘genocide’, is unconstitutional.

The decision by France's highest legal authority invalidates the law, which President Nicolas Sarkozy was due to ratify by the end of February

Ankara had threatened to cut diplomatic relations with France over the legislation, which had been challenged by lawmakers who appealed to the Council to make a ruling.

In a statement, the Council ruled that the law, which would have imposed a 45,000-euro fine, a one-year prison sentence, or both, on genocide deniers, ran against the principles of freedom
of expression written into France's founding documents.

In addition, the ruling also implies that criminalizing the denial of a crime that was defined by the parliament as such is unconstitutional.

Senators pleased with the outcome...

Meanwhile, the senators that were against the law from the start are now extremely pleased it has been halted by France's highest legal authority.

Republican Centrist Union senator Nathalie Goulet states, "The Constitutional Council's decision is the mark of a significant defeat for Sarkozy. In the name of equality, I am very pleased for Turkish-French relations."

French Senator Jacques Mazard commented, "The overturning of the law shows that we were right. We are pleased with the decision and we salute it."

The law which was recently thrown out by the Constitutional Council had created a serious crisis in Turkish and French relations over the past two months.

After the French Parliament passed the law on January 23rd, 77 signatures were collected from the Senate and 65 from the assembly, for an appeal initiated by UMP member Michel Diefenbacher, which was sent to the Constitutional Court for review.

The overturning of the law by the Constitutional Court is now seeing widespread response in French media.

The law deemed unconstitutional and an infringement on freedom of thought and expressions, stipulated one year jail sentences and fines up to 45,000 Euros for the denial of Armenian allegations surrounding events that transpired in 1915, which France has recognized as 'genocide' since a 2001 parliamentary ruling.