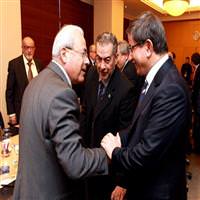 Foreign Affairs Minister Ahmet Davutoğlu met with Burhan Ghalioun, the chairman of the Syrian opposition Transitional National Council who arrived with a 12-member council at the Conrad Hotel. The meeting, which went on for four hours, was closed to the press. Ghalioun did respond to journalist’s questions however, once the meeting came to a close.

Responding to a journalist who questioned whether or not they had discussed establishing representation in order to coordinate military aid, Ghalioun answered, "No, we only discussed the issue of humanitarian aid."

Explaining that this meeting was solely attended by civilian officials and there was no military presence from either the Free Syrian Army or from the Turkish Armed Forces, Ghalioun shared that they discussed the situation for those in Baba Amr and their needs following the massacre.

Ghalioun underlined the fact that military issues were not discussed during the meeting with Davutoğlu and stated, "These sorts of issues should be discussed between members of the military."
Our door will remain open all the way for the Syrian public.

According to information obtained from Foreign Ministry sources, Foreign Affairs Minister Ahmet Davutoğlu explained in detail Turkey's policy on Syria. Expressing Syria's importance for Turkey, Davutoğlu mentioned that they do not in anyw ay want ethnic or religious based politics.

Minister Davutoğlu also provided information on Turkey's diplomatic efforts and the recent ruling presented and subsequently accepted by the Human Rights Commission in Geneva. Davutoğlu also emphasized that Turkey's open door policy remains and that they will continue to offer support for those who seek shelter in the camps set up in Hatay and stated, "Our doors and homes will remain open to the Syrian public."