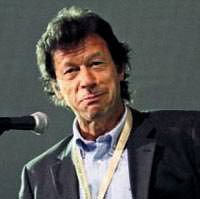 All of the surveys conducted in Pakistan of late, reveal that former cricket player and playboy Imran Khan, who is also known for his admiration for Recep Tayyip Erdoğan, is a sure win for the upcoming elections in Pakistan.

In an interview published in England's Sunday The Observer, entitled, 'Imran Khan: the man who would be Pakistan's next prime minister', Khan expresses the expectation that he will have a landslide victory in the upcoming elections.
When asked which political leaders he admires most, Khan responded by stating, "Recep Tayyip Erdoğan, the moderate Islamist Turkish prime minister and Brazil's Lula da Silva, who forced a better redistribution of his country's newly generated wealth."
."