Erdoğan to meet Obama then heads for Iran 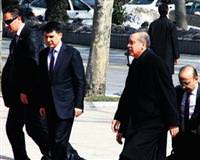 Prime Minister Erdoğan is expected to meet with Obama during the Nuclear Summit which begins on March 26th in South Korea. Two days later, Erdogan will be meeting with Ahmadinejad in Iran.

After taking a short break from international engagements due to undergoing surgery, Prime Minister Tayyip Erdoğan is resuming his regular schedule, which is kicking off with the nuclear crisis. Although Erdoğan is headed for a day trip to Germany on March 17th, the Nuclear Summit in South Korea will truly mark the return to his active international program. Meanwhile, Erdoğan's schedule for the March 26th-27th Nuclear Summit in South Korea has begun to take shape. In addition to participating in the summit's main program, Erdoğan will also be holding a series of bilateral discussions with a number of state leaders. Those discussions will primarily deal with developments in the Middle East, focusing on the situation in Syria. Erdoğan is also expected to meet with U.S. President Barack Obama, during his stay in South Korea.

Following his series of meetings at the summit, Erdoğan will make a stop in Tehran on his return. During Erdoğan's trip to Iran, which is scheduled for March 28th, he will meet with Iran President Ahmadinejad to discuss joint relations, issues regarding Syria as well as the upcoming nuclear negotiations. It is being emphasized that the messages Erdoğan delivers in Tehran will be of utmost importance. Iranian Minister of Foreign Affairs Ali Akbar Salehi has announced that the next round of negotiations with the five-member nations of the UN Security Council and the 5 + 1 group's Germany will be held in Istanbul. An exact date for which has not yet been released.

A FILE IN THE BAG

The Prime Ministry have begun preparing a file Erdoğan will take with him that will contain a series of messages to be delivered concerning nuclear safety and preventing the spread of nuclear weapons, that Erdoğan will be carrying with him. This file will include a message to Middle Eastern nations requesting they destroy all nuclear weapons, without exception. Erdoğan will also emphasize that there should not be a double standard in play in nuclear negotiations and that in regards to the nuclear crisis; instead of solely focusing on Iran, other regional nations harboring nuclear weapons, especially Israel, should also be brought to the forefront. As for the upcoming nuclear negotiations in Istanbul, it will be requested that all sides keep their channels of dialogue open. Meanwhile, Erdoğan is also planning to pay a visit to China in April.