Turkey will not leave Cyprus on its own 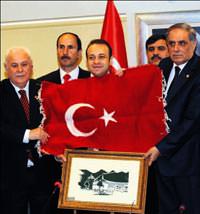 During the meeting, Bağış responded to a question on the Cyprus issue by relaying the messages he delivered during a recent trip to London.

"It saddened me to see certain Greek sympathizers attempt to pick out certain meanings from my announcements," states Bağış, who went on to say: "Our sole intentions are to establish a solution through compromise on both sides and for a United Cyprus State's to take on the EU term presidency in July. However, if a solution is not reached then we will be open to considering all alternatives. When a journalist comrade there asked if the Turkish Republic of Northern Cyprus joining Turkey was an option, I said that this could be an alternative. If a solution is not reached, then no one can expect that Turkey would leave Northern Cyprus on its own."