We do not want sectarian strife 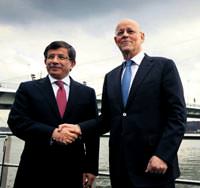 Warning that ethnic or sectarian division in Iraq, Syria and Lebanon would be a disaster for the region, Foreign Affair Minister Davutoğlu says "No one should allow this to happen.”

Minister of Foreign Affairs Ahmet Davutoğlu was in Holland to commemorate the 400 year anniversary of diplomatic relations between Turkey and Holland, when he delivered a series of striking messages on a some of the top items on the foreign policy agenda.

Davutoğlu emphasized that when it comes to Syria diplomatic options are being weighed in primarily. In regards to whether or not a 'military memorandum' was an option, Davutoğlu stated, "If it comes to Turkey's national security, then of course all necessary preparations will be made."

Davutoğlu proceeded to answer our questions as follows:

What are your most recent observations on Syria?
Despite all of our efforts, the developments in Syria are concerning. Proceeding with a militarist outlook, the Syrian administration refused to heed the messages delivered by its own public, by regional nations and especially Turkey and by the UN and is instead using a few countries' tactical support only to increase the ongoing massacre.

When will the Istanbul Meeting be held?
It is planned for the end of the month.

Will Russia and China be invited?
We are still evaluating the options. Unfortunately, they did not attend the previous meeting.

Does Assad have a chance of remaining?
I don't think the Syrian public will consent to Assad remaining in power; they will be the ones to make the final decision. However, these attacks have significantly weakened the Syrian administration's ability and legitimacy.

Is Turkey preparing a memorandum?
We are placing emphasis on diplomacy. However, when it comes to Turkey's national security, then of course all necessary preparations will be made.

Will Syria return to Lebanon?
Unfortunately we are going through a very painful time. However if Syria were to become Lebanon or Iraq or should there be ethnic or sectarian division in Iraq, Syria and Lebanon, that would be a disaster for the region, Foreign Affairs Minister Davutoğlu says, "No one should allow this to happen."

What direction are meetings going with the Syrian opposition?
We will continue to hold meetings. We are placing high importance on all of the groups taking on a comprehensive structure. We are contributing to their preparations for Syria's future.

Does the Syrian administration play the PKK card?
We see the PKK's infiltration and we track them. We hold the same stance as we have in the past to anyone trying to play any card that would put national security at risk.