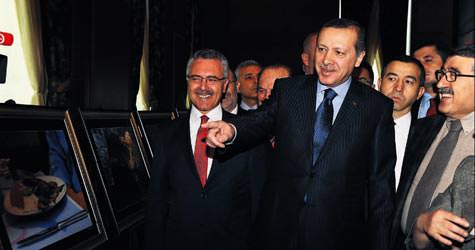 Prime Minister Erdoğan responded by relaying a quote from the Koran, "Allah is the only one who will decide how long I have to live. When that time comes, there is no way to bring it forward an hour or extend it for an hour."

Speaking at an AK Party group meeting, this was the first time the Prime Minister has spoken so strongly and emphatically since an address following the June 12th elections on his national unity and brotherhood project. This time, Erdoğan addressed the allegations that 105 journalists are under arrest in Turkey. Erdoğan proceeded to list the crimes they were being detained for one by one. During the AK Party meeting Erdoğan went on to deliver the following series of messages:

A military attaché-like journalist in Washington...

"We are a party that believes in fate. Allah is the only one who will decide how long I have to live. We sincerely believe that when the time comes, there is no way to bring it forward an hour or extend it for an hour. Those who fall for hearsay and try to dictate our fate are just as presumptuous as they are insolent. Those who print such allegations in a headline, who use this focal point as directed by others, are also just as presumptuous."

Without actually alluding to her name, Erdoğan harshly criticized Yasemin Çongar, stating that those journalists who worked in Washington during the February 28th period as if they were honorary military attaches are today the apostles of hate that attempt to appear as if they are against a coup," states Erdoğan , who goes on: "Those who are throwing around these headlines, should know this well, Allah is the only one who decides how long someone lives and no one can alter that whatsoever. It is his plan alone; he operates it and will continue to operate it."

No one is detained in Turkey for journalistic activities...

"A union in Turkey is on an intensive slander campaign through spreading allegations that Turkey's journalists are under arrest arbitrarily. CHP Chairman Kemal Kılıçdaroğlu has also embraced these allegations and is currently participating in a number of campaigns that are significantly harmful to Turkey. In fact you know, at one point he even went as far as to make the careless statement that 'there are no journalists under arrest in Israel, however there were over 100 journalists arrested in Turkey.' Let me remind you that just last week in Ramallah, two Palestinian television stations were cut down.
We have looked into this list of 105 journalists. Twenty-five people on the list have been convicted, 70 have been detained and their trials are ongoing. Six names on the list have no prison records, in other words they are fabricated names. Four of the individuals on the list have been released. However, this is what matters the most… Out of the 105 people on the list, only six actually have press cards.

Sixty-nine people on the list are connected to the PKK, Kongra-Gel and KCK organizations, while seven are connected to THKP/C and four to DHKP/C; 11 people are involved with the Devrimci Karargah Evleri and four with MLKP. The names of two journalists that are being tried for allegedly preparing to stage a coup were not included in the list.

Turkey does not deserve this kind of black propaganda. Everyone should take a look at this list of supposed journalists under arrest. No one can defend those being charged for staging armed attacks on police officers as being journalists."