Women can put an end to terrorism 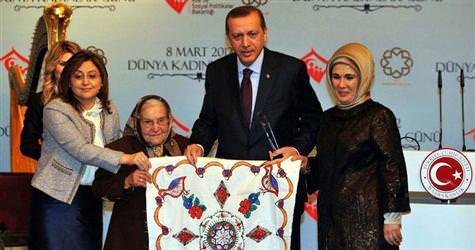 Erdoğan called on mothers whose children have joined the PKK to take a stand against the terrorist organization to put an end to terrorism.

Noting that there was additional meaning to celebrating this day in Mardin, Erdoğan said, "Mardin is a historical city, a city of knowledge and a city of brotherhood. It is the city of the long-suffering, honorable, astute and courageous Anatolian women."

Prime Minister Erdoğan went on to state, "On this year's March 8th International Women's Day, we need to remember and honor the more than well-deserving women who were victims in the Van earthquake, those who lost their loved ones in Uludere, those who have lost their children and husbands, the women of Morocco, Tunisia, Algeria, Libya and Egypt, who painfully came out victorious." Erdoğan also delivered a message of solidarity to women from Syria, Iraq, Somali and Palestine.

Erdoğan assured there be no doubt that when women stake claim to their own issues, they will always find at their side men of mercy, conscience and faith. He then emphasized that women have great responsibilities to bring an end to terrorism in Turkey.

Recalling an operation on Mount Cudi, Erdoğan said they saw 13-year-old children coming out of caves that had been torn apart from their families. Emphasizing that having your children taken from you must be one of the most difficult things, Erdoğan stated, "The pain suffered by mothers' whose children were taken up into the mountains, kept in caves and to not hear from them for five years, must be as big as the mountain. That is why mothers need to tackle this issue; they need to speak out for their children in the grips of this terrorist organization of savage massacres."

Prime Minister Erdoğan went on to recall Hatice Belgin, a woman who jumped over a suicide bomb in the city center of Bingöl on October 29th in an attempt to protect her child, yet losing her life in the process. "Just how the deceased Hatice Belgin jumped over a bomb in order to protect her children, I ask those mothers whose children are in the mountains to raise your voices to the terrorist organization in that very same spirit.

I hope and wish that Kurdish mothers, women and men will finally see the true colours of the PKK terrorist organization. We are expecting them to say, 'Take your hands off of our children". Mentioning that they hand these 13-year-old weapons and send them off to kill or be killed, Erdoğan stated, "An organization that stages vile and savage executions amongst themselves and kills mothers in front of their children, who slays a pregnant mother-to-be who was filled with hope, must now leave this land without a trace. I believe from the depths of my heart this land will do what befits it and will join as one heart to say stop to the unrest, killing and terrorism."